The Importance Of A Judge 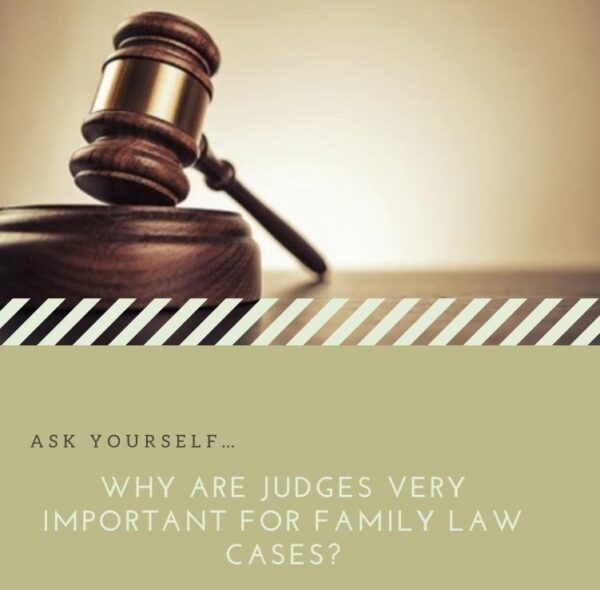 In every court, the judge holds the supreme position. Playing an impartial and fair role is what we expect from a reputable judge, along with the continuation of systematic proceedings through a particular case. The same is the situation with family law cases where a judge has to listen to the aggrieved parties and witness the evidence and proof in order to make a final decision.

Dependency of the case on the judge

In a family law case, a judge can control nearly all aspects of the case, making them even more critical for the children and the family at large. However, an effective counsel for each of the parents and even a guardian ad litem for the children can influence the judge using legal tactics, including making objections, using motions to strike, and addressing complex procedural issues in advance. Just understanding the rules and how to interact with them – including the choice of venue and forum – are key in filing a custody action. When the judge is picked in part by choosing the right venue, you can see how important venue can be.

Powers that a judge can exercise

In order to analyze the importance of a judge in court, we must examine the powers that a judge has. Below are the main powers of a family court judge:

Inherent Authority:
Inherent authority comes with the overall power that a judge gets through their status. With this authority, they can change the decisions they have made until the final verdict – and sometimes even after. They can make decisions that affect the finances, location where you live, and even how often you see your children. You can even expect the judges to levy sanctions if one of the spouses delays the judgment intentionally or frustrates the decision-making. Sometimes, such power is controversial and can exaggerate the problem.

Calling questions:
In a family court case, a judge has the power to call witnesses. Within this power, the judges have the right to ask questions from the witnesses, and they can even appoint or call experts and continue the questioning until the testimony or the illicit facts are clarified. The court can demand someone take a drug test or obtain psychological testing.

A judge must ensure accountability in the court process and justice delivery services, apart from the general settlement. As stated in the law, “[D]ependency proceedings are designed to protect children, help parents alleviate problems, and, where appropriate, to reunite families.” 9

Ex parte communication:
Usually, the judges do not communicate with a few parties to a case because such behavior creates controversies. But in exceptional circumstances, especially in the family case law, judges can communicate with one of the parties or their representatives. It is also possible that the judges can manage the entire hearing without the other party or parties to the case.

With all this discussion, the importance of a judge on a case in court in Tupelo, Mississippi, is quite clear, and you’ll obviously want to convince the judge about the merits of your case, rather than ignoring the importance of delaying the case without any solid ground. If you do so, you’ll probably establish a negative reputation of your case’s merits with the judge, and there are significant chances that you’ll lose it.

Judicial Bias:
Judicial bias is a broad term that can have multiple meanings while managing the court proceedings in family court law. Usually, a bias has to be explained by the judge if the acceding party establishes such an impression using the set tests according to the law.

But you can find the importance of a judge in court from the fact that the rude comments made by the judge aren’t included in the bias. Disapproval and even hostility towards a party or the council aren’t considered biased when analyzing the judge’s attitude. So, accusing a judge of bias isn’t easy, and that is because of the great power that the judges have over the dependency or family cases.

Having said this, such a situation does not imply that the judges can adopt any misconduct, and the parties to the case cannot ask for the removal or accuse a judge of misconduct. Although the procedures are tough, you can always request the removal of a judge if you think they are being biased against the other party.

How to convince the judge in a court in a dependency court?

Despite all these powers that a judge holds in the family court, you can still convince a judge regarding the case’s merits. Here are a few important techniques to do so:

These are not all the points to convince a judge in the dependency court. But these are definitely the strongest. As a lawyer, you can research and add customized points to defend the case, keeping in mind the excessive powers that a dependency court judge has.

In family law cases all over the United States (including Tupelo), the judges have a stronghold over the case, and such power exists for the judges of Tupelo, Mississippi. Although a fair trial and due process is part of every trial or hearing, you’ll have to learn how to convince the judge in court to win the case.

As stated above, many of the generally ill-seeming practices are allowed in case of dependency cases. Still, even in these cases, there is a jurisdiction in which the judges can exercise their power. If they move away from the ultimate goal of providing justice and the right of free trial to every party, you and your council must raise your voice and challenge their decision and behavior in the best possible way.

Decorate With Your Children
December 12, 2022

Sculpt Your Future and Your Family – Protect Your Children
May 12, 2022
Go to Top